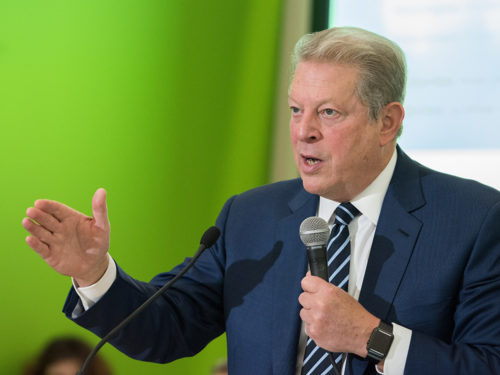 Stockholm (NordSIP) AP Fonderna’s Ethics Council celebrates 10 years of  existence in 2017 and held a well-attended seminar at IVA in Stockholm  on Monday March 20 with former U.S. Vice President Al Gore and Johan  Rockström, the director of the Stockholm Resilience Centre and a  professor of environmental science at Stockholm University, as keynote  speakers. Over 150 key people from the financial industry and from the  upper political echelons of Swedish society participated. The theme of  the seminar was responsible and sustainable investment.

Since inception in 2007, AP Fonderna’s Ethics Council has focused on  influencing the sustainability efforts of global companies through  dialogue and proactive industry projects. The AP Ethics Council is a  partnership between the First, Second, Third and Fourth AP Funds with the objective of contributing to high sustainable returns by encouraging  companies to adopt more sustainable practices in their businesses. Its  guiding principle is to make a difference by being long-term,  responsible and committed owners that influence companies to improve  their work on environmental and social issues.

AP Fonderna was represented by CEO Eva Halvarsson, who moderated the  seminar together with AP Ethics Secretary John Howchin. They explained  the Ethical Council’s dialogue efforts and experiences over the years  and shared their views on future risks and opportunities concerning  investments and their effect on the environment and human rights.

Al Gore, with his considerable political background and as one of the  pioneering influencers of views on the world’s sustainability  challenges, reiterated his message concerning the alarming state of the  earth’s climate and the importance of understanding the value and  opportunities associated with sustainable investments. In a deeply  inspiring presentation Mr Gore addressed the challenges of global  environmental systems and human rights.

“The seminar emphasizes the importance of owners’ and investor  involvement in such complex and important issues,” said Ms Halvarsson.  “Leading motivators like Al Gore, John Ruggie and Johan Rockström remind  us that owners should get involved in companies instead of selling them  and leaving the problems to others. Our belief is that investments in  well-managed companies in the long term are better than others and  therefore that working dialogues with companies are crucial. The AP  Fonderna Ethics Council’s work is more important than ever.”

Professor Rockström also gave a very inspired speech about the  challenges facing humanity, and thus those also faced by investors.  Based on his scientific background, he believes the adaptation of  society to the limits given to us by the earth’s ecological system is  essential for the planet to regenerate itself over time and to create  wealth for a growing global population and for future generations.

Mr Gore and Professor Rockström praised the AP Ethics Council and the  Swedish National Pension Fund for their important and considerable  efforts to drive the issues forward in public consciousness.

Stockholm (NordSIP) - On 3 November, NordSIP learned that Willem Schramade would be leaving academia and his independent consultancy to join Schroders as Head...
News

Stockholm (NordSIP) - The rapidly evolving European sustainable regulation landscape poses challenges for the investment industry in navigating and meeting such a complex set...

Let’s face it! It is already happening