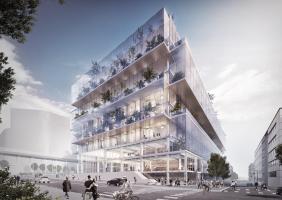 Vasakronan To Receive €200m for Green Buildings from EIB

Stockholm (NordSIP) – Vasakronan, the Swedish real estate company, is slated to receive EUR 200 million from the European Investment Bank (EIB) for the construction of a so-called “nearly zero-energy building” (NZEB) in Gothenburg, as well as the refurbishment of a Stockholm building complex to NZEB standards, according to an EIB press release.

Climate action is a central priority at the EIB, and it has recently supported similar projects in Sweden, Finland and Germany.

“Financing from EIB is very competitive, and because the bank analyses the projects it funds very thoroughly, the loan is a quality stamp for Vasakronan’s brand,” according to Vasakronan CEO Fredrik Wirdenius. “Furthermore, every loan process involves a high degree of collaboration between treasury, sustainability experts and technical staff. Consequently, new questions arise which provide us with new perspectives and insights that further drive engagement.”

The loan will support and building and refurbishment project worth a total of EUR 437 million, of which one part comprises the construction of the new “Platinan” building close to Gothenburg’s central railway station, while the other will see refurbishment of the “Sergelhuset” complex in the Norrmalm area of central Stockholm.

“We’re proud to support Vasakronan’s initiative because climate action is high on the agenda for the European Investment Bank,” said Romualdo Massa Bernucci, Director for EIB lending in the Nordics. “The EU Directive on the energy performance of buildings means that both the residential and office buildings will have to meet challenging standards in the near future. Since buildings are generally responsible for a large part of the CO2 output, making them more energy efficient is an important step in mitigating our environmental footprint in large cities.”

Investing in sustainability projects across the world is in an exciting proposition to many, potentially being both profitable and ethical - though it is...
Read more

August 4, 2020
Stockholm (NordSIP) - In the latest step of the process of legislating a sustainable investment infrastructure for the European Union, the European Commission requested...

Stockholm (NordSIP) - In the latest step of the process of legislating a sustainable investment infrastructure for the European Union, the European Commission requested...
Read more

A postcard from Almedalen

Deutsche AM with new CIO for Responsible Investments

January 3, 2017
We use cookies to ensure that we give you the best experience on our website. If you continue to use this site we will assume that you are happy with it.OkRead more