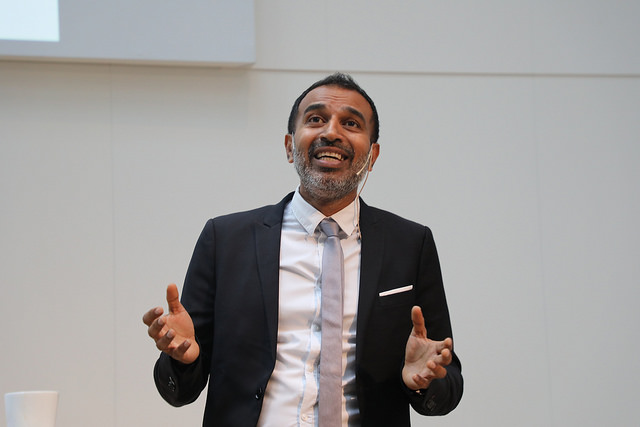 Stockholm (NordSIP) – Sony Kapoor, Managing Director of the think tank Re-Define and currently strategy advisor to CDC group, the UK development finance institution, and to Norfund, the state-owned Norwegian Private Equity company, possesses the unique talent of sounding alarm bells in the most engaging way possible. In the course of a rousing keynote address at the TBLI Nordic conference last week, he walked participants through the systemic dysfunction of the financial system, misguided investor attitudes that obstruct sustainable financing, and the vagaries permeating long-term investment at odds with its purpose – all within a half hour and sporting a broad smile suggesting this is an individual unafraid to take on the powers that be – and win.

Kapoor, who has also served as strategy adviser to the Norwegian government on its sovereign wealth fund, as an advisor on regulatory reform to the European Union during the financial crisis and as a contributor to the UNEP Inquiry on a Sustainable Financial System, has a knack for turning his experience into critical illumination. Most recently, Re-Define released a report taking Norway’s SWF – the largest in the world – to task for its double standards on sustainable investment, a topic Kapoor didn’t shy away from during his presentation. Indeed, he holds that the SWF is emblematic of the larger problems with the financial industry, and its inability to adjust to global socio-political, economic and demographic demands.

“No financial sense at all”

When Kapoor first started advising Norway’s SWF, he related, he was shocked to find that 16% of the fund was invested in oil, gas and coal – for a fund that gets all its revenue from the sale of oil and gas, as he said, this made “no financial sense at all.” He also found the fund was run essentially as an endowment, making 50- or 100 year investments only in liquid stocks and bonds, compounding the financial mismanagement. Enveloping these odd decisions, he found that the fund, which is supposedly dedicated to intergenerational wealth transfer, had 96% of its holdings invested in OECD countries, as opposed to anticipating the shaping of the properly global economy.

Kapoor consequently waged what he called a “10 year war” to convince the SWF to invest in illiquid assets, to divest from oil, gas and coal, and to invest in Emerging Markets – with some success: at present, 16% of the fund is invested in emerging economies, it has a USD5-8bn portfolio of green investments and has divested entirely from coal. The fund, however, mostly remains an example of the failings of the financial system in toto, particularly in terms of addressing sustainability (and not least its own). For example, as a long-term investor profiting from externalities, which could be health risks, climate change or tax avoidance, a fund can have a negative bearing on all the other companies in its portfolio. “Externalities” are thereby not externalities, but a core part of investment decision-making, meaning there is an additional level of responsibility incumbent on institutional investors like Norway’s SWF to behave differently than the others. “One can understand if a hedge fund with a 1-2 yr investment horizon invests in a way that is not sustainable,” he emphasised, “but one cannot understand if a fund like one of the [Swedish] AP’s or the Norwegian SWF invests in a way that does not have sustainability at its core.”

The present state of long-term investment

Sustainability, then, by definition entails a reassessment of what actually constitutes risk. Fast-forwarding to his current work with the CDC and Norfund, he found that contrary to the commonly received wisdom that investing in developing countries and illiquid assets is risky, returns for both CDC and Norfund actually exceed returns on traditional asset classes year after year – and with lower volatility, if such is taken to be the definition of risk (!) With about USD80trn of long-term institutional capital sloshing around the financial system, of which roughly 80% is invested exclusively in OECD countries and a further 80% in listed liquid assets, amid the lowest interest rates in living memory, there ought to be huge incentives for green investments. “There has never been a better time to move into capital intensive investments with very little operational costs despite the higher upfront capital investment costs,” he exclaimed, and thereby to move away from e.g. natural gas, where the costs are all concentrated in the future. The problem is that the money is not going to the right places.

For example, with pension funds globally struggling in the current ultra-low interest rate environment – such as, again, the Norwegian SWF, which has USD100bn worth of negative yielding bonds on its balance sheet (which means it is paying USD100bn to the German and other governments for the privilege of borrowing) – there is no money going into green investments such as solar plants or windmills in developing countries like India, where the returns on capital are much higher. Returns on various forms of sustainable investment within a safe legal regulatory environment would be such that with scaling, the negative yields could be eliminated instead of the continuous borrowing at unimaginable levels. The opportunities, he says, are right there under our noses.

So why aren’t they being taken? Research from the London School of Economics and the IMF has shown expectations for long-term investors over the next two decades at no more than 2%, as opposed to the traditional cushy 60/40 portfolios investors are accustomed to. For example, Swedish AP or Dutch pension funds have become used to 7% average returns over the past two decades: going from 7% to 2%, taking compounding into account, suggests that “we are headed for certain financial disaster” if there is another recession, Kapoor warns: for comparison, the half to two thirds of debt held today is actually the capital gains accrued over the past three decades, among other things because of the fall of global interest rates from 8% in the 1980’s to 2% today.

Such poor prospects, combined with the fact that 80% of investments are essentially within the OECD amid a demographic decline in Europe, stagnating productivity, record levels of public and private debt, shrinking political space, and where central banks have much less room for countercyclical manoeuvring, are inviting disaster. Meanwhile, with the present situation so fragile, many long-term investors are doing the precise opposite of what they are taught in Finance 101 – rather than trying to maximise return for minimised risk, they have essentially lobbed guaranteed low returns from asset classes for what is very highly correlated and often rising political risk.

For example, with half of global growth accounted for by the increase in the number of workers worldwide and the other half coming from increases in productivity, demography should be central to financial returns. Productivity growth, consequently, is not in Germany, the U.S., Sweden or Norway, but in India, south Asia or many parts of sub-Saharan Africa, where countries are increasingly in a position to “leapfrog” developmentally due to technology, bypassing wasteful infrastructure, such as in the case of mobile phones. With this phenomenon a staple of the future, with potentially huge returns on investments that won’t be happening in traditional home markets and comfort zones, why, then, isn’t there more investment in Emerging Markets?

The SIR model of investment

The problem, broadly speaking, is that broad swathes of people employed in the financial sector have the wrong skill set. What is needed, Kapoor suggests, is people with expertise in sustainability and in illiquid asset classes, because the days of easy money are gone. Making money now requires scoping out opportunities where they lie and keeping an eye on big technological trends and changes in value systems. So-called ESG and sustainable investing factors in, he says, because traditional financial metrics are simply unable to capture who is going to win and who is going to lose, with the competitive advantages of old gone in an era where everyone has access to the same technology. The competitive advantage can only be in working hard up front to obtain information that other investors don’t have, and to be able to anticipate and invest in line with global trends.

Kapoor briefly summarised his remedy as what he calls the “SIR” model of investment: ‘S’ for Signalling, Support and Stewardship, ‘I’ for impact investing and institutional investors, and ‘R’ for risk, return and regulation. Companies are failing at signalling the long-term costs of capital, failing on stewardship to engage others on their experiences and failing on support to finance investments that fulfil social needs. Institutional investors will be critical in driving impact investing and engaging a more bottom-up approach if change to the current financial system is to be effectuated, while regulation is beginning to do its job mitigating unnecessary risk, albeit at far too slow a pace.

And with that impressive framework for critical discourse – fitting the TBLI spirit of focusing on educational and more provocative content to challenge asset owners – the questioning began. The lasting impression was inevitably that this was not the last one has heard from Sony Kapoor.

Glenn W. Leaper, PhD
Glenn W. Leaper, Associate Editor and Political Risk Analyst with Nordic Business Media AB, completed his Ph.D. in Political and Critical Theory from Royal Holloway, University of London in 2015. He is involved with a number of initiatives, including political research, communications consulting (speechwriting), journalism and writing his first post-doctoral book. Glenn has an international background spanning the UK, France, Austria, Spain, Belgium and his native Denmark. He holds an MA in English and a BA in International Relations.
Previous article
DK’s Sampension Overhauls ESG Policy
Next article
Sustainability a No-Brainer for Infrastructure
October 5, 2017

Stockholm (NordSIP) - On 3 November, NordSIP learned that Willem Schramade would be leaving academia and his independent consultancy to join Schroders as Head...
Impact

For many risk averse institutional asset owners, Emerging Markets (EM) investing can seem like a bit of a gamble at the best of times. ...
Grapevine

Stockholm (NordSIP) – At the beginning of October, Nordea Asset Management (NAM) confirmed the appointment of Cecilia Fryklöf as Head of Active Ownership. In...
Impact

Chicken or egg, what came first? In my experience, when you are hungry, the question is kind of irrelevant. You just want to know...
Grapevine