The Wind is Turning

On February 25, the European Commission (EC) announced that the European Parliament (EP) and Member States had agreed to create two new categories of low-carbon benchmarks to help boost investment in sustainable assets. One of them is a climate-transition benchmark and the second one is a specialised benchmark that brings investment portfolios in line with the Paris Agreement goal to limit the global temperature increase to 1.5˚C above pre-industrial levels. The rules for the new benchmarks will be determinant in influencing large investment decisions. The Technical Expert Group (TEG) appointed by the EC in June 2018 is therefore working hard on fine-tuning the details.

At the Sustainable Investment Forum Europe in Paris, on March 12, a panel of experts involved in the benchmark legislation commented on their work so far, and on the possible implications of the new rules. Among the panelists, Delphine Dirat joined the European Commission a year and a half ago, just in time to see the publication of the action plan for sustainable finance. The plan took into account the work of a high-level expert group (HLEG) appointed by the commission a year earlier. Shortly thereafter, the EC published an impact assessment, which evaluated the consequences of the proposed legislation. The legislative proposals came out in May 2018: one on the taxonomy, the second on disclosure and the last on benchmarks. This first step is called a “level 1 act” or “legislation act”. At this stage in the legislative process, Member states discuss the EC’s proposal and establish a new text, including their amendments. “Try-out” discussions ensue. These closed-door discussions between the EC and co-legislators lead to a political agreement. This was the agreement the Commission announced in February, regarding the benchmark legislation. What follows is the establishment of the “level 2 text”, which will specify the technical details of the legislative proposal. The European Financial Market Authority (EFMA) will vote on this text. Given the blend of both financial and environmental concepts, the EC appointed the TEG to help with those details, according to Dirat.

According to Dirat, the agreement over the two new benchmark categories, including an obligation on disclosure for benchmarks, represents a huge achievement for the Commission and for the sustainable finance agenda. The climate-transition benchmark will bring the resulting benchmarked portfolio to a “decarbonization trajectory”. This represents a measurable, science-based and time-bound trajectory to reduce carbon emissions. It also implies that policy makers acknowledge the existence of emission reduction objectives disclosed by companies, which will be used for the selection rating and excluding criteria, at the discretion of the benchmarks’ administrators. For Dirat, this is completely different from what the Commission proposed. The EC proposed to codify the existing low-carbon benchmarks. This proposal is more ambitious and takes the proposal closer to what the Parliament wanted, which was to take into account, in the selection and weighting of these benchmarks, the companies that disclose their objectives to reduce the CO2 emissions. According to Dirat, the TEG will help to avoid greenwashing, which is a potential risk for this particular take on the new benchmark legislation.
The second benchmark category is ‘Paris-aligned’. It means that the resulting benchmarked portfolio’s carbon emissions will be in line with the Paris climate agreement goal, to limit the global temperature 1.5 degrees compared to pre-industrial values. The definition is quite broad. The methodology and minimum standards which the Technical Expert Group will publish will form the base for the benchmark construction.

Each benchmark’s methodology will have to include an explanation of how the key elements of E, S and G are reflected. In the benchmark statement, they will disclose whether or not they push through ESG objectives as well, and as of the 31st December 2021, all benchmark with the exception of interest rate and currency benchmarks should include information of the degree of alignment with the Paris agreement.

These two new benchmark categories are labels, they are not mandatory, Dirat points out, but the disclosure is required for all benchmarks. The Technical Expert Group will help the EC in defining the minimum standard for the methodology of the two benchmarks, as well as the KPIs that benchmarks will have to disclose in their methodology and in their benchmark statement.

Sébastien Lieblich, another panelist, is the Global Head of Equity Solutions at MSCI and the chairman of MSCI’s equity index committee. Benchmark providers are the primary target of this regulation and being involved is therefore crucial, Lieblich explains. “MSCI is generally supportive of the sustainable finance initiatives coming from the European Commission. We supported the enhanced disclosure initiative of the European Parliament and actually pushed for extending the disclosure further,” he explains. “We already report on ESG for all our benchmarks and publish the carbon footprint for all our indexes, be they ESG or traditional indexes. However, we do have some concerns when it comes to the final text, which we believe may introduce unintended and harmful biases,” Lieblich says.

“In the absence of guidelines from the TEG, we ran some simulations based on the text from the European Parliament to see how an index based on these criteria would look like,” the index manager explains. “Our simulation used the science-based targets, as disclosed by the science-based target initiative to build a list of relevant securities that have either a proof target or that have disclosed targets. The results are quite surprising. By focusing on these targets, the simulated index includes many companies involved in ESG controversies such as Nestlé, Philip Morris, McDonald’s or Walmart. These are the top constituents in these portfolios. The index is also heavily exposed to mega cap companies and is heavily concentrated in Europe, consumer staples, while underweighting financial companies.”

“So it’s important that the members of the TEG be mindful with the restrictions they suggest in order to ensure that the future transition indexes are fit for duty,” Lieblich adds. “For there to be broad diversified low carbon benchmarks, we need to have more robust company ESG disclosures to support the creation of these benchmarks. The regulation should be jointed up.”

Moderating the panel was TEG member Andreas Hoepner, Professor of Operational Risk, Banking & Finance at the Michael Smurfit Graduate Business School and the Lochlann Quinn School of Business of University College Dublin. He highlights the trickle-down effect that the benchmark disclosure requirements could have on company transparency. “The non-financial reporting directive has no legislative teeth, so companies do not have to do more disclosure than what they are comfortable with,” the TEG member laments. “But if we require benchmarks, like the MSCI World, to disclose the average levels of women on the board or average levels of who reports accurate greenhouse gas emissions, we would achieve disclosure from companies. The benchmark provider would effectively become the watchdog that actually collects these numbers.”

“This is incredibly important,” the professor continues. “We have the opportunity to use virtually any index, except for currency and interest, for this purpose. There is a very large amount of index with extensive firm-level coverage. Even commodity indexes would have to talk about ESG if they wanted to trade in the EU if we were to pursue this regulatory avenue. That is a lot of impact of that rather simple disclosure”

Lieblich agrees with Hoepner about the power of the index. In his experience, asset managers have moved much faster than legislators. “This idea echoes the use of benchmarks as a means of engagement,” he explains. We have seen this trend of asset owners increasingly using benchmarks and their composition as an engagement tool. They explain to excluded companies why they are not included, and what they need to do to resolve that situation.” This motivation for companies is clear, he continues. “As soon as they are included in the benchmark, they become exposed to a much broader range of investment opportunities. At MSCI we created on a gender diversity index that investors can use as a powerful engagement tool. The Japanese Government Pension Investment Fund (GPIF) was particularly interested in this line of products for example. The drive for change is coming from investors, not us. We are just adapting to the evolution of their preferences.”

“When asset owners change their investment behaviour and start dictating to their own managers the way they want to invest, and which benchmark they’re going to use. This initiates the change of trajectory. We, and our index provider peers, are not driving this change; it is being driven by asset owners and asset managers. We just adapt to what they’re asking. We provide choice.”

Hoepner concludes the session in tandem with Lieblich. “If you’re not an asset owner, go and lobby policy makers. But if you are an asset owner, then maybe consider switching some of the assets, because that is a more persuasive argument to Sebastian at MSCI and his competitors at FTSE and elsewhere. I would like to close with the words of Guido Fürer, CIO at Swiss RE and a member of the TEG,” he says, quoting that: “Not every sustainable investment will have a great return, but non-sustainable investing is uneconomic. Not constraining your ESG risk is deadly and wrong”.

This article is part of NordSIP Inights – Sustainable Indices and ETFs, which you can download here: 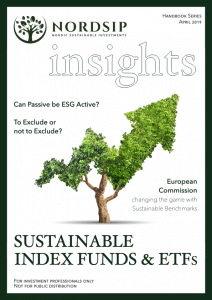 Stockholm (NordSIP) - Data is one of the recurring topics of concern for sustainable investors. While accounting and tax reporting has streamlined financial reporting...
Read more
Insights

The Power of Green Bond Investors: Adani & the Carmichael Mine

This article is part of NordSIP Insights - Sustainable Fixed Income Handbook. Read or Download the entire publication here. While the legitimacy of the green...
Read more

Should I Stay or Should I go?

Beyond the Lapel Pin

Will COVID-19 prove a watershed for ESG? (Aviva)

December 20, 2019
We use cookies to ensure that we give you the best experience on our website. If you continue to use this site we will assume that you are happy with it.OkRead more