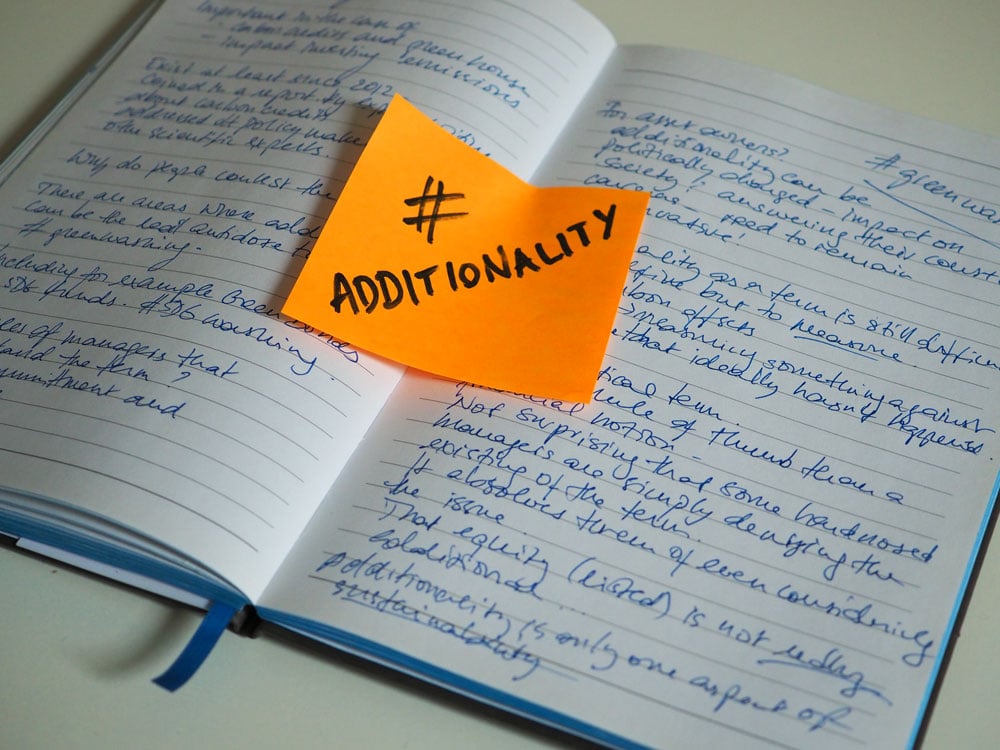 Stockholm (NordSIP) – “Additionality is a real increase in social value that would not have occurred in the absence of the intervention being appraised,” we learn from HM Treasury.

In another straightforward sentence, the Business Dictionary defines additionality as the “Extent to which a new input (action or item) adds to the existing inputs (instead of replacing any of them) and results in a greater aggregate.”

Quite simple, you would think? But clearly, there is more to this economic definition, since most asset managers or institutional investors we have met in the past few weeks have declined to provide their own definition of the term.

What’s the problem with Additionality?

The controversy around the term probably originates from the issues surrounding carbon offsets, which are designed to compensate for one activity’s carbon emissions by financing another activity’s carbon emission reduction. “Offsets are an imaginary commodity created by deducting what you hope happens from what you guess would have happened,” Dan Welch was quoted in The Guardian on June 16 2007, summarizing the ambiguities around the subject.

“In theory, additionality answers a very simple question: Would the activity have occurred, holding all else constant, if the activity were not implemented as an offset project? Or more simply: Would the project have happened anyway? If the answer to that question is yes, the project is not additional,” says global greenhouse warming in its definition page.

Intuitively, the notion is not so difficult to understand, but it is often hard to measure and, therefore, to prove. As outlined in the three-part discussion paper “What is additionality?“, by Michael Gillenwater of the GHG Management Institute, additionality is a term that is relative to its baseline. However, as we just established, the baseline of carbon offsets, for example, can be entirely hypothetical, as it is precisely what is being avoided.

In another discussion from TerraPass, the controversy about additionality in the context of carbon offsets is elevated to a more philosophical level. “The concept has intuitive appeal — of course you want your money to fund greenhouse gas reductions that wouldn’t have happened otherwise. But some have argued that additionality in its purest form is more of a noble ideal than a practicable concept, and ultimately the quest for additionality serves to distract us from the higher order goal of improving the environment.”

From carbon offsets to sustainable investing

More recently, the term additionality has started appearing increasingly in the context of investments, especially in the case of sustainable finance (like with green bonds) or impact investing.

Additionality is the “additional economic activity that wouldn’t have happened otherwise except for our investment,” says Nathan Jay, CFA in the CFA Institute Magazine.

“Additionality is new capital that is being allocated to address particular problems or underinvested areas that have been highlighted by the UN SDG,” says one of the managers we recently interviewed. “It is not enough that a business does good in its existing operations. We need to make progress and drive more change by allocating more capital to new projects that will make a difference.”

In order to qualify as additional, capital investments need to generate an activity (with a positive impact on climate change or other sustainable development goals for example) that wouldn’t have occurred without that capital. But as a cynical portfolio manager recently pointed out: “if no one else than me has an incentive to invest capital in that project, why should I?” Most modern investors, however, should recognise that natural human biases may hold investors away from perfectly viable opportunities. Social bias or the bystander effect, for instance, may be invoked.

Ultimately, additionality may raise a much more important question which lies at the core of the concept of impact investing, or even sustainable investing more generally. Quite simply said, if “new” capital needs to be allocated to a project to be deemed “additional” then, 99% of the time, buying and selling listed stocks does not qualify. Still, listed stocks generate returns and they are liquid. For decades, listed equities have been at the core of institutional portfolios to fulfil the fiduciary duty pension funds and other institutions have towards their constituents. We can’t divest from the stock market, just because it is not additional, can we?

“The notion of ‘additionality’ tends to be of great importance to [traditionalist impact investors]: to be impactful, investments should pass the ‘but for’ test: it would not have happened, but for our investment. Almost by definition, that puts the focus on more innovative financial instruments, transactions that tend to be smaller in scale, and underlying social and environmental issues that can be narrowly defined,” says Manuel Lewin, Head of Responsible Investment at Zurich Insurance Company, on behalf of the Cambridge Sustainable Investment Leadership (CISL) Group.

There is certainly more to sustainable investing than additionality. Of course, there may be many other reasons to exclude stocks, purchase others, tilt in or out of sectors, and invest in sophisticated investment strategies involving listed equities. Baseline and measurements are of course also important points that need to be considered.

For now, let us just agree that the word Additionality exists and that the notion needs to be integrated into any credible sustainable investment policy. The main reason for harnessing the powers of financial investments to address global issues such as climate change or the sustainable development goals, in general, is that a massive amount of capital needs to be reallocated to new projects.

If we agree on the fact that there is a financing gap to resolve global issues, then capital needs to move to places it currently isn’t invested in, which, by definition, means that it will be additional. Logically, if capital isn’t additional, it is not going to fill the financing gap, and we will not be able to address the global issues.

Aline Reichenberg Gustafsson, CFA
Aline Reichenberg Gustafsson, CFA is Editor-in-Chief for NordSIP and Managing Director for Big Green Tree Media. She has 18 years of experience in the asset management industry in Stockholm, London and Geneva, including as a long/short equity hedge fund portfolio manager, and buy-side analyst, but also as CFO and COO in several asset management firms. Aline holds an MBA from Harvard Business School and a License in Economic Sciences from the University of Geneva.
Previous article
Dutch Pension Develops First SDG Index
Next article
Storebrand Launches Sustainable Solutions in the Netherlands
April 25, 2019

In this Simply Said series on biodiversity, we have sought to identify the scale and significance of the problem, understand nature-related risks in investors’...
Future Generations

The question on many people’s minds is whether current food systems can meet humanity’s future nutritional demands. People can be fed, but whether they can be fed sustainably and maintain a healthy lifestyle depends on a major transformation of the food industry.
Simply Said

Biodiversity Dashboard – A Look at the Metrics

Stockholm (NordSIP) – Vague claims to be “nature friendly” have long been popular in the consumer goods sector.  As the public starts to get...
Biodiversity

Stockholm (NordSIP) – In the first of our series of articles on biodiversity and natural capital, we reminded ourselves of the basic concepts involved...