Green Bonds From the Land of Ice and Fire 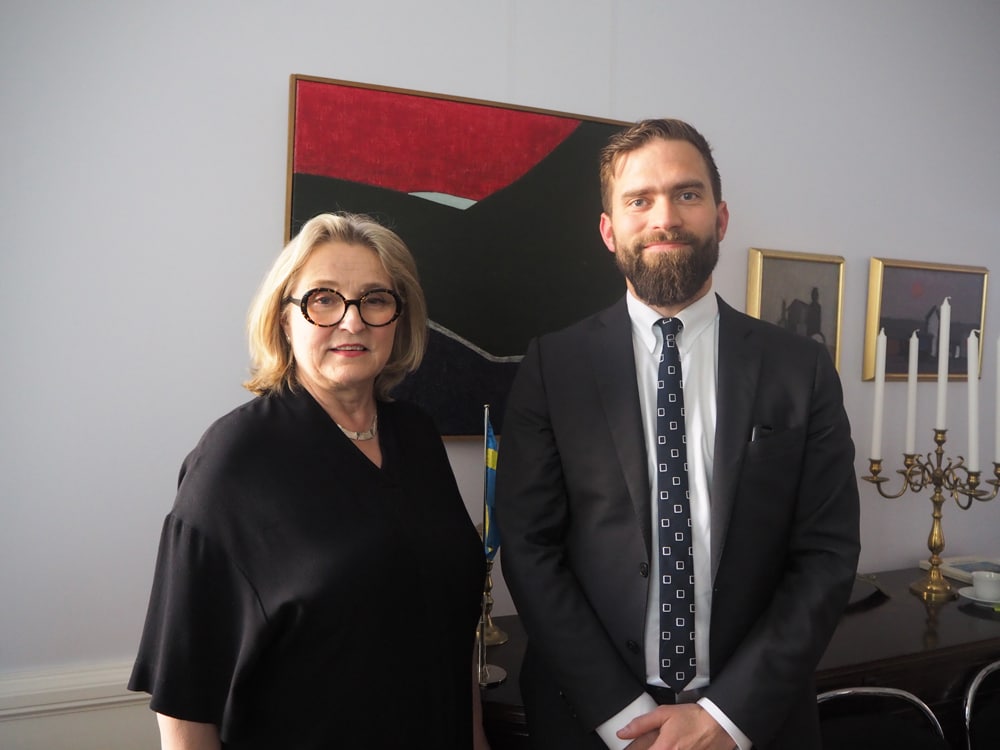 Stockholm (NordSIP) – “Although the Nordics are at the forefront of sustainable investing, more needs to be done to find solutions,” said Estrid Brekkan (pictured), Iceland’s ambassador to Sweden, at an event organised by Fossar Markets, a leading Icelandic independent securities firm. “The land of ice and fire might become the land of just fire given the rate at which glaciers are melting. Given present global warming trends, forecasts suggest all the glaciers of Iceland will melt in the next 150 years,” remarks Andri Guðmundsson (pictured), Managing Director Fossar Markets.

“The goal of this event is to introduce Iceland as an investment opportunity,” explains Steingrímur Finnsson, Managing Director at Fossar Markets. “Today, foreign investors only have a 10% stake in Iceland’s equities and fixed income markets, well below the average for Scandinavia (50%) and global markets. We believe this could rise to 50% in the next three to five years.”

Contrarily to southern European countries, the resolution of the country’s financial woes has left it in an extremely healthy fiscal position, Finnsson notes. “Central government debt-to-GDP has fallen from 88% at the peak of the crisis in 2011 to 30% in 2018. Based on these low debts and deficits we expect a credit rating upgrade for the Republic of Iceland from A- to perhaps AA.” Finnsson is also confident about the overall financial and monetary outlook for Iceland. “Recent current account surpluses make us bullish on the Icelandic Krona. Government bonds are trading at around 4% and credit spreads are wide, which we believe provides opportunities for foreign investors.” Moreover, a year after the capital controls were lifted, MSCI included Iceland in its frontier index, soon to be followed by FTSE. However, the country’s main asset remains its ability to sustainably exploit its geothermal energy sources.

“The history of Iceland is the story of a poor country becoming rich but it is also a story of innovation in the field energy,” notesGuðmundsson, contrasting the dark smog of 1933 Reykjavik to the clear blue skies of the capital today. Iceland is a leader in renewable energy, Guðmundsson explains highlighting that 80% of the country’s energy consumption comes from renewable hydro and geothermal sources. “The use of geothermal energy for household heating avoids between 2-4 million tons of CO2 emissions annually,” he notes. The three key sustainable players in Iceland are the City of Reykjavik, Reykjavik Energy (OR) and Landsvirkjun, with a total of €250 million in green bonds outstanding.

The City of Reykjavik has issued four bonds listed on Nasdaq Iceland, according to Helga Benediktsdóttir, Head of Treasury for the City of Reykjavik. “The city’s total borrowing may not exceed 150% of its regular income. Investments are financed with 20-40% new loans. The rest comes from regular cash flow,” she explains.  Reykjavik has issued an inflation-linked green bond maturating in 2048. “The index-linked structured is appealing to local pension funds, which are the main investors in municipal bonds,” Benediktsdóttir explains. The Green bond framework of the City of Reykjavik received a second opinion by CICERO, which rated it “Dark Green”. Proceeds from the green bond have been directed towards green building and clean transportation projects, according to Benediktsdóttir. Other potential projects also include waste management, sustainable land use, among others. According to the Head of Treasury, “the three existing projects funded by the green bond have avoided the emission of 856.8 tons of CO2.”

Perhaps the most interesting presentation came from Ingvar Stefánsson, Chief Financial Officer at OR, who discussed  CarbFix “an industrial process to capture CO2 from emission sources and permanently store under the surface”. While there are some concerns about potential seismic risks created by the storage process, the carbon capture technology is extremely encouraging. Other projects also consistent with CICERO “Dark Green” rating if OR’s green bond focus on renewable energy, the maintenance of existing facilities, wastewater management and clean transportation. “Because geothermal power plants continuously run at full capacity but usage varies throughout the day, there is also potential for investments in hydrogen batteries to allow storage at times of lower usage,” OR’s Chief Financial Officer concludes.

“With about 73% market share Landsvirkjun is Iceland’s largest electricity generator,” explains Jóhann Þór Jóhannsson, Assistant Treasurer at the electricity company. The company owns 20 power plants – 15 hydropower stations, 3 Geothermal stations and 2 wind turbines – with a total installed capacity of 2,145MW. The company has strong financials and it has decreased its dependence on the demand from local aluminium operations by Alcoa, Century Aluminium and Rio Tinto through contract renegotiation and diversification of its consumer base. Landsvirkjun issued the first US$ 200 million international green bond from Iceland in March of 2018. According to Sustainalytics’s second opinion, the framework is “transparent and robust in alignment with ICMA”.

Asides from these three green bond issuers, Reykjavík Social Housing (Félagsbústaðir) has also published a social bonds framework, which it can use to fund the provision of affordable social housing to its targeted social groups.

Filipe Albuquerque
Filipe is an economist with 8 years of experience in macroeconomic and financial analysis for the Economist Intelligence Unit, the UN World Institute for Development Economic Research, the Stockholm School of Economics and the School of Oriental and African Studies. Filipe holds a MSc in European Political Economy from the LSE and a MSc in Economics from the University of London, where he currently is a PhD candidate.
Previous article
SPP Global Plus
Next article
A New Hope for Carbon Capture and Storage
May 9, 2019

Stockholm (NordSIP) – The 27th Conference of the Parties of the UNFCCC (COP27) began on Sunday 6 November in Sharm El-Sheikh, Egypt.  Among the...
Impact

For many risk averse institutional asset owners, Emerging Markets (EM) investing can seem like a bit of a gamble at the best of times. ...