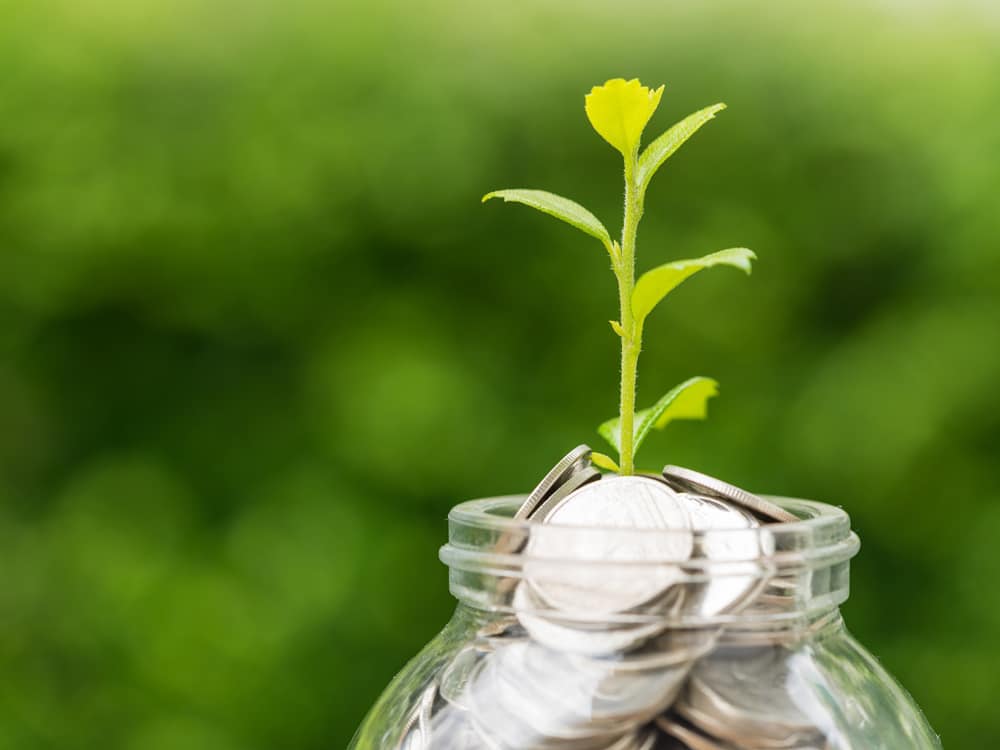 Global green bond issuance reached record highs of US$ 121billion in the first half of 2019, outperforming the previous US$ 103 billion record from 2018. This is consistent with the performance witnessed during the first quarter of the year when US$ 45 billion was issued across the globe. “This year has seen strong growth in the green bond market, and we are very proud to be among the banks globally leading this growth and enabling the transition to a greener economy,” says Lars Mac Key, Head of DCM Sustainable Bonds at Danske Bank, who kindly provided a review of green bond markets to NordSIP.

Corporates alone stand for US$ 50 billion, more than a 100% increase from the same period in 2018. 117 unique corporate issuers took part in the green bond market in the first half of 2019. The euro market alone stood for more than half of the volume. Financials were the second largest source of green bonds, which brought 67 unique issuers with bonds worth US$ 25 billion, up US$ 3 billion from the same period last year.  Despite sovereign issuance falling from US$ 24 billion in the first half of 2018 to US$ 20 billion this year, the trend of new sovereigns entering the green bond market continued. 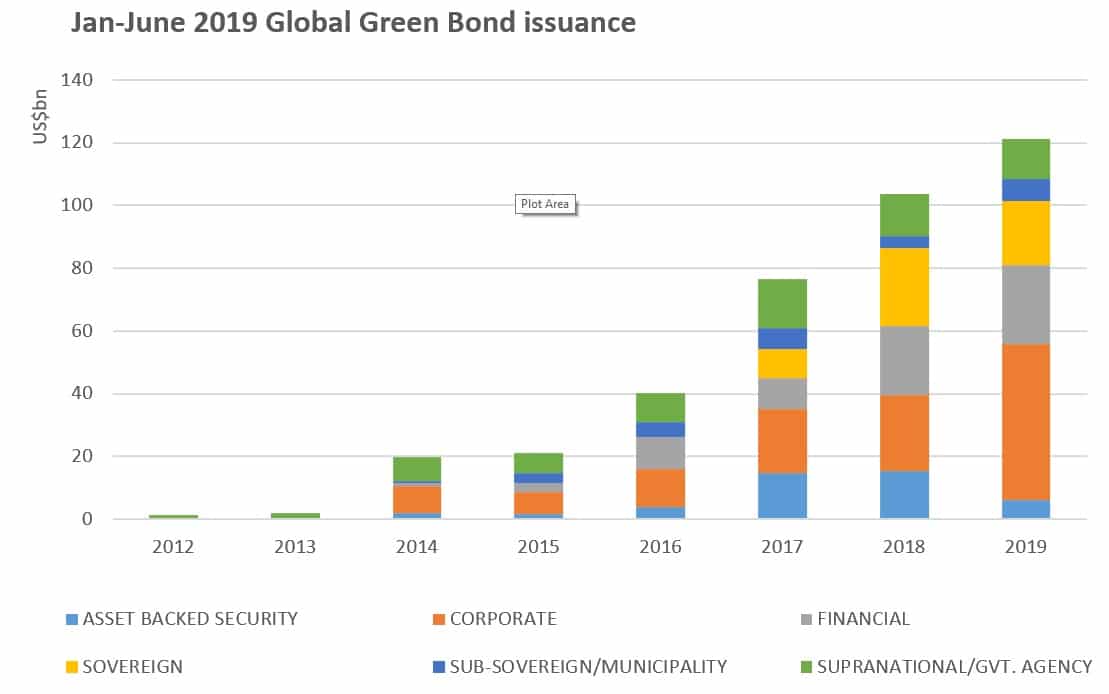 Among these issuers, Chile was the first ever American sovereign to issue a green bond. Korea, Hong Kong and the Netherlands also took their first steps into the green bond market. Returning issuers like France, Poland, Belgium and Indonesia maintained their presence while rumours of German, Spanish and Swedish bonds persisted.  Social and Sustainability Bond issuance added another US$ 20 billion to the sustainable bond market, up US$ 5 billion from the same period in 2018.

Euro issuance increased from € 32 billion in the first half of last year to € 56 billion in the same period this year, the exact same total amount that was issued for the whole of 2018. Corporates continued to be the main driver of the euro green bond market with 31 issuers bringing € 24 billion to the market. Asides from repeat issuers like ADIF, Engie, Enel and Iberdrola we saw newcomers like Telefonica, Vodafone, ESB and Vattenfall. Financial institutions also performed well, issuing € 11 billion in green bonds denominated in euros. The market saw inaugural green bond issuance from Danske Bank, OP Finance, Leaseplan and Citigroup as well as from repeat issuers like BNP, ING and Credit Agricole. Among sovereigns, established names like France, Belgium and Poland issued a total of € 7.5 billion, while newcomers Chile and the Netherlands together issued € 6.8 billion. 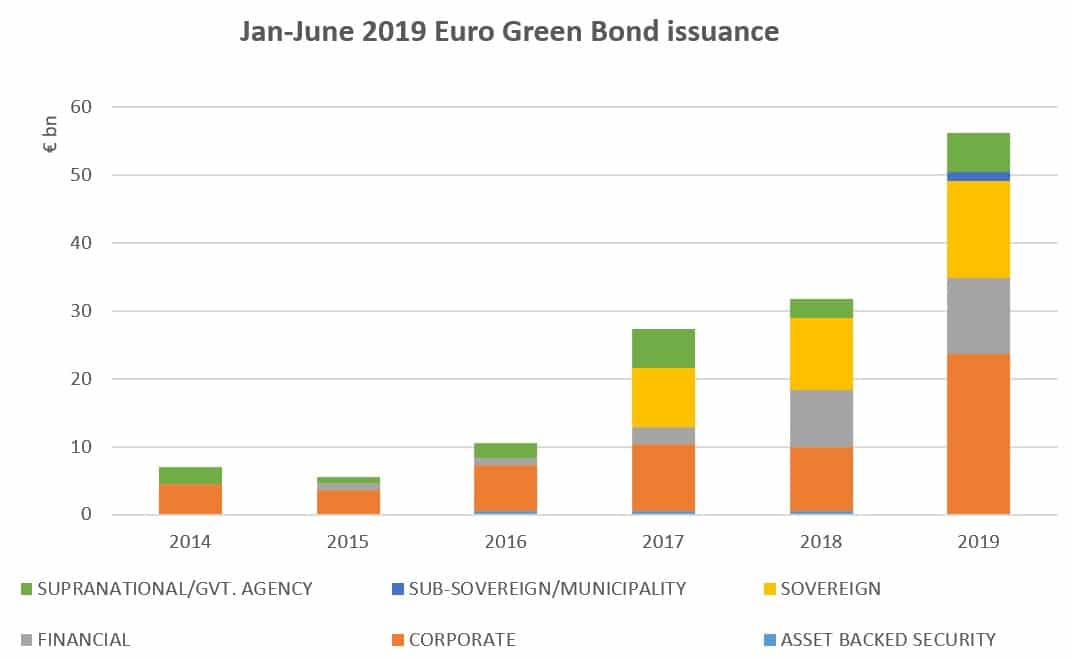 SEK continued to be the Nordic driver of green bonds. The first half of 2019 saw the issuance of SEK 85 billion (US$ 9.2 billion), a whopping SEK 13 billion more than what was issued for the whole of 2018 and up 90% from the first six months of 2018. SEK is the third most common currency for green bond issuance, representing 8% of the global market, behind US Dollar (25%) and Euro (53%). The SEK green bond market is fairly split between Corporates, Supranationals/Government Agencies and Financials. The major increase in 2019 was the financial sector which grew from SEK 7 billion in the first half of 2018 to SEK 24bn in the same period of 2019. Much of this growth was driven by DNB Boligkreditt’s green covered bond SEK 9.7 billion and SBAB’s green senior non-preferred and green covered bonds worth SEK 3 billion and SEK 6 billion, respectively.

The Danish market has also seen some movement. Realkredit and Nykredit have both opened lines for green DKK mortgage bonds. Danske Bank and European Energy issued green bonds in Euro, while Ørsted came to the sterling market with a GBP 900 million. Most prominently, the EIB issued the first-ever SSA green bond in DKK in late June, a DKK 3 billion climate awareness bond. The bond was well received by the investor community and is a natural step, in line with the increased green bond investing activity witnessed from the Danish investor community over 2018 and 2019.

Looking at the geographic origin of transactions, Sweden has continued to dominate Scandinavian issuance in the first half of 2019, followed by Denmark and Finland, with Norway coming last.

On the dealer side, Danske Bank stands out as the highest ranked Nordic bank for Green Bonds for the first six months of 2019, followed by SEB and Nordea. Ranking at number 9 in Bloomberg’s Global Green Bond League Table, the Danish bank has arranged green bonds worth US$ 6.8 billion, with league credit of US$ 2.9 billion.

Stockholm (NordSIP) - Länsförsäkringar announced that its investments in green and sustainable bonds tripled in 2019, from SEK3.2 billion at the start of 2019...
Read more
Green Bonds

Chile and France Make a Splash

Stockholm (NordSIP) - The 2020 green bond market has started with a splash, with France and Chile issue a combined US$5.5 billion equivalent in...
Read more

The MSCI Principles of Sustainable Investing

The world is rapidly changing and its interdependency and interconnectivity are accelerating at an exponential pace. These significant changes require new approaches to investing...
Read more
Job Post

We have an exciting opportunity to join the sales team and manage business development and key account management for Trucost ESG solutions provided to...
Read more
Insights

This article is a part of NordSIP Insights – Handbook – “Sustainable Fixed Income - 2019”. by Yo Takatsuki, Head of ESG Research and...
Read more
Insights

Stockholm (NordSIP) - One of the main attractions of hedge funds to institutional investors has been their ability to deliver uncorrelated absolute returns. A recent report indicates...
Read more

May 17, 2018
We use cookies to ensure that we give you the best experience on our website. If you continue to use this site we will assume that you are happy with it.OkRead more