Stockholm (NordSIP) – The Norwegian Ministry of Climate and Environment announced that the Brazilian government “has dissolved by decree the Amazon Fund Guidance Committee (COFA) and Amazon Fund Technical Committee (CTFA). Thus, given the current circumstance, Norway has no legal and technical basis for providing the annual contribution to the Amazon Fund planned for this year.”

The Amazon Fund was created to raise donations for non-reimbursable investments in efforts to prevent, monitor and combat deforestation, as well as to promote the preservation and sustainable use in the Brazilian Amazon. The fund is part of the important COP-related REDD+ effort to reduce emissions from deforestation and forest degradation in developing countries. The Norwegian state reportedly contributes 94% of the funding for the Amazon Fund, followed by Germany and Petrobras, Brazil’s state-owned oil and gas company.

Purported Irregularities in the Amazon Fund

This announcement brings to a conclusion a dispute between the Brazilian government, and the Amazon Fund’s main funders, the governments of Norway and Germany. The discussions began in May, when the Environment Minister of Brazil, Ricardo Salles, claimed he had found irregularities in the fund’s activities. The comment came as a surprise since the Amazon fund was audited by both KPMG and the Brazilian court of accounts who had not identified any important irregularities.

Subsequently, Mr Salles expressed a wish to revise the activities of the fund, among other to direct funds towards remunerating farmers who had been evicted from illegally deforested land in the Amazon rainforest.

The environment minister is not without controversy in his native Brazil, where he has been found guilty of administrative impropriety during his tenure as environment secretary of the state of Sao Paulo.

Although the Amazon Fund financed 11 projects worth a total BRL 191.19 million, the fund has reportedly been inactive during 2019.

In parallel, Brazilian President Bolsonaro and his administration seem to have made a policy of not enforcing laws against deforestation in the rainforest. According to preliminary figures published by Brazil’s National Institute for Space Research’s (INPE) Real-Time Deforestation Detection (DETER) system, deforestation alerts so far this year have covered 4,733 sq Km of potential destroyed forest area. The system is not perfect and does not match exactly with the final Deforestation of the Amazon Satelite Monitoring Project’s (PRODES) dataset.

But if the DETER figures are any indication, extrapolating the second half of 2019 based on the first six months would suggest a 9,466 sq Km loss of forest area in the Amazon rainforest for the whole of 2019. To put that in perspective, that’s the equivalent to the deforestation of an area 1.46 times the metropolitan size of the city of Stockholm. This would be the largest level of deforestation since 2008, and decrease the total area of Amazon rain forest coverage to 80.45% of its 1970 level, down 0.25% from 2018. 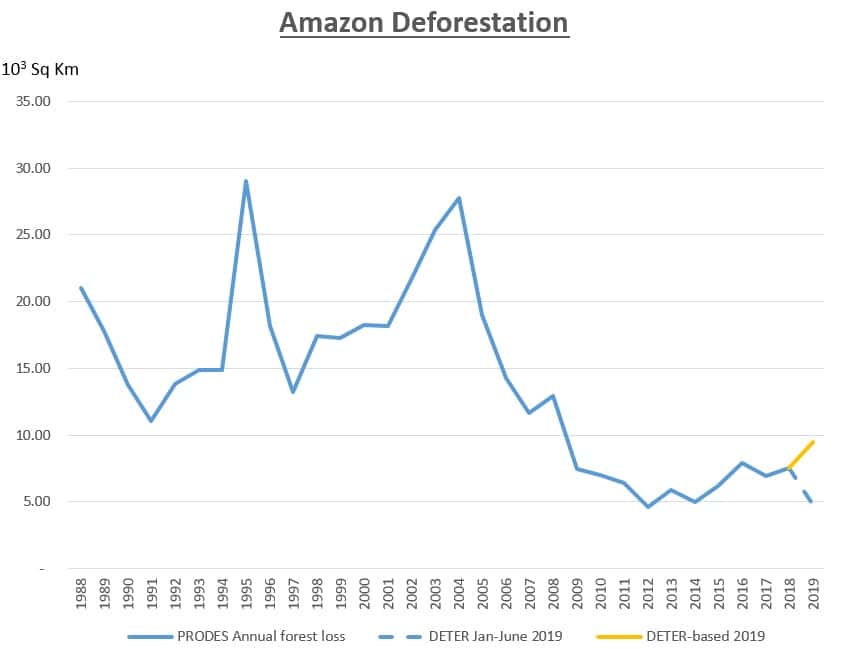 While the contrast with the recent past may not prove particularly stark, it would be almost twice the 4981 sq Km amount targetted by the 2010 National Policy on Climate Change

In response to these developments, reportedly led Germany to withdraw its own contributions to the Amazon Fund. “Brazilian government policies in the Amazon raise doubts about continued, sustained declines in the rate of deforestation,” Environment Minister Svenja Schulze was quoted by the German edition of The Local as having told the television news show Tagesspiegel.

Asked about whether the German decision would negatively impact Brazil’s image, Mr Bolsonaro asked “Are great countries interested in the image of Brazil or in dominating Brazil?” according to Brazilian weekly, Exame.

In reply to the Norwegian decision, the Brazilian President once again pushed back asking “Isn’t Norway that Northern European country that kills whales?”

Filipe Albuquerque
Filipe is an economist with 8 years of experience in macroeconomic and financial analysis for the Economist Intelligence Unit, the UN World Institute for Development Economic Research, the Stockholm School of Economics and the School of Oriental and African Studies. Filipe holds a MSc in European Political Economy from the LSE and a MSc in Economics from the University of London, where he currently is a PhD candidate.
Previous article
IRRI Survey (Nordic Cut) – The Catch up
Next article
Nordics Dominate European Sustainable Fund Industry
August 16, 2019

Stockholm (NordSIP) - According to a recent report by SIX Group, asset managers and wealth managers have different ESG integration needs, with the first...
Events

Barcelona (NordSIP) - There is a common theme running through all the presentations during the opening sessions of this year’s PRI in Person conference,...