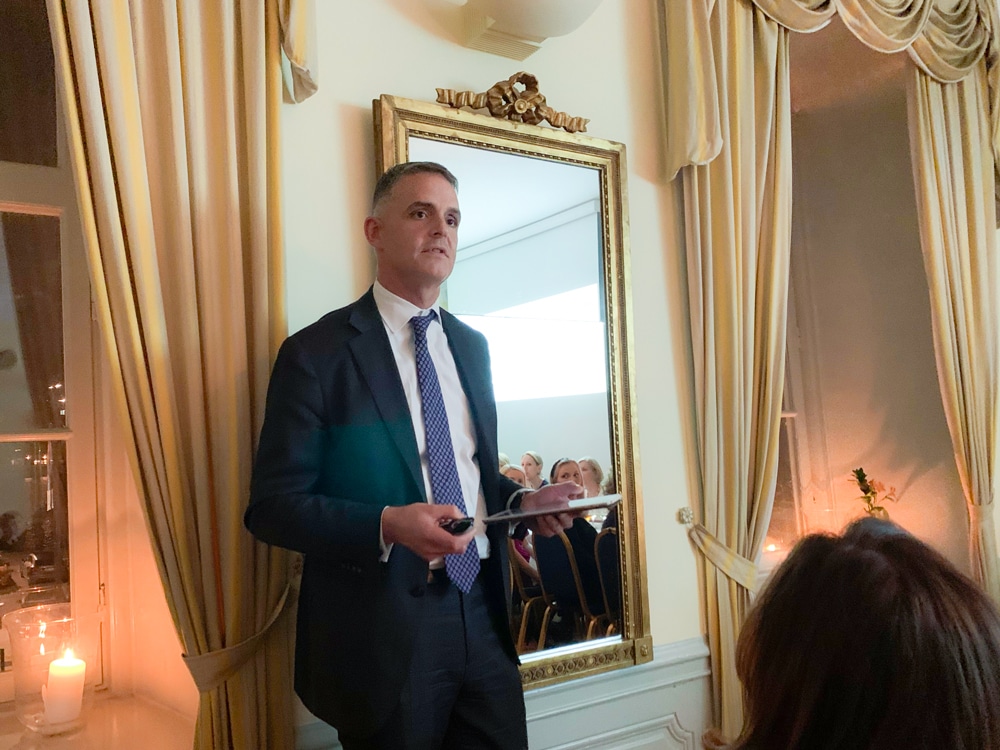 A Fearless Girl in a Bull’s World

Stockholm (NordSIP) – On the occasion of a Gala dinner organised by the Nordic network of women in asset management, KvinnoKapital, on 23 October 2019, NordSIP had the opportunity to catch up with Cuan Coulter (pictured), Executive Vice President and Head of EMEA at State Street Global Advisors (SSGA) and discuss the state of gender diversity and investments that foster change.

“Back when I started my career in 1995, I assumed that the financial industry was a meritocracy where the brightest and best rise to the top. It never occurred to me that the playing field was not levelled,” Coulter starts. “However, I soon came to the realisation that the system systematically favours men over women. My experiences spurred me on to become a spokesperson for the critical need for gender diversity, both at SSGA and the industry as a whole.”

Cuan Coulter is responsible for coordinating SSGA’s entire EMEA business, leading the preparation for regulatory change in Europe, and acting as SSGA’s primary interface with regulators and governing boards. He joined SSGA in 2008 from PwC where he started his career in 1995. He currently sits on the advisory board of the Diversity Project, a cross-industry initiative championing a more diverse and inclusive culture within the savings and investment profession.

As part of its efforts to raise awareness about gender diversity issues, SSGA commissioned the statue Fearless Girl, which has been on display in Wall Street since March 2017. The unveiling of the statue coincided with the launch of the SPDR Gender Diversity ETF (SHE). On the occasion of KvinnoKapital’s Gala, SSGA kindly brought the statue to Stockholm to highlight the efforts of the women’s network.

SSGA’s Stewardship of Performance Through Diversity

Gender diversity is not a window-dressing exercise. It is an essential part of risk-adjusted-performance. “There’s research showing that gender-diverse boards, in particular, tend to pay more attention to risk management and are less inclined toward cronyism and groupthink,” Coulter notes. “Moreover, data from MSCI, McKinsey and a host of other studies show that companies with women in leadership tend to perform better than those without.”

The business world needs to wake up to this reality says the SSGA executive. “Despite that evidence, we saw that in 2017, one in four Russell 3000 companies – the 3,000 largest public companies in the US – did not have a single woman on their board,” he explains. “As fiduciaries, we had an obligation to engage with this issue as stewards of the assets we manage to drive board diversity through dialogue and if necessary, to use our proxy voting power to effect change, just as we would with any other long-term risk to our clients’ portfolios.”

“Since we unveiled the Fearless Girl, we have engaged with 1,350 public companies across the US, UK, Australia, Japan and Canada,” Coulter recounts. “These companies had no women on their boards, and we informed them that we were prepared to vote against them if we didn’t see action. Of this group, 583 (or 43%) have now added a woman director or committed to do so in the near term.”

“For us, advocating for gender diversity is not part of a political agenda – it’s key to our long-term performance agenda,” the head of EMEA says, before adding that “as one of the largest index fund providers in the world, a huge portion of the assets we manage are essentially permanent capital.” The nature of index funds works as a commitment device for SSGA. “Unlike in our active strategies, our index fund managers can’t walk away from a company so long as it is in the index. If you’re an index manager, you engage with the company to influence positive change.”

“We believe effective, independent and diverse board leadership is a precondition for ensuring that companies are focusing on the long term, and increasing the probability of attractive long-term returns. What we’re pushing for is diversity of thought on company boards and in senior leadership roles,” he adds.

“We are aware of the risk of cognitive and unconscious biases arising in managerial decisions related to reward and recognition assessment,” Coulter acknowledges. “We have calibrated year-end performance management and promotion discussions to assess all employees on an absolute and relative basis.”

“We’ve focused on increasing the gender diversity of boards, specifically because, in addition to the research that shows gender diversity improves company performance, there is good data available about the gender makeup of boards. It’s a variable we can easily measure and track change around the globe,” the fund manager notes.

Identifying Opportunities With SHE

Gender diversity is not an abstract issue for SSGA. “We built the SHE ETF and the underlying SSGA Gender Diversity Index to address the gender gap in corporate America. They identify companies that have been able to attract and retain a diverse workforce,” Coulter explains. “The index identifies the top companies in their sectors that have the highest percentages of women in senior management.  The fund and index have performed as we expected since they were launched in 2016 (February 2016 for the index, March 2016 for the ETF). Since its inception, the ETF has returned 11.91% (annualised to 30 September 2019).”

The SSGA Gender Diversity Index experienced some sector concentration as a result of market movements according to Coulter. “We revised the methodology in July 2019, so that sector weights are equal to the underlying benchmark (so the index is now sector neutral),” he explains. “This change allows for firms with higher gender diversity qualities to drive performance while avoiding sector biases. In addition, we capped security weights to 5% and added a modest turnover buffer, which represents minor liquidity improvements to the overall index profile.”

“We are committed to a culture of inclusion and diversity at all levels and recognise that gender diversity in middle management is an issue,” the SSGA executive states. “In 2018, we reset our diversity goals with three and five-year targets to accelerate the representation of women at senior levels of our organisation, which is a key element in eliminating our gender pay gap.

“At SSGA, we have recently introduced the European Leadership Empowerment & Acceleration Programme – otherwise known as ‘eLEAP’,” Coulter says. “This is an accelerated programme designed for ‘mid-career women’ in the EMEA region. In this pilot year, we have 14 participants in eLEAP, and each has a sponsor within SSGA and a career coach who meets with them every two months. The programme also provides external sessions to participants. We look forward to monitoring the progress of the participants.”

Aside from the programmes discussed above, SSGA also takes part in external forums and initiatives to help drive diversity in the industry. “SSGA is a founding member of the Diversity Project, which aims to hire and retain diverse talent in investment management. We participate in the Financial Times Women in Business Forum, which is a career development programme for mid-career female executives in the UK to accelerate into senior leadership,” Coulter clarifies. “Every year, a few female members of our team participate in the 30% Club’s mentoring scheme, which offers to mentor women at all levels of their career.”

“Ultimately, true gender diversity will only be achieved when we come together as an industry and agree to work together to drive change. We have made progress, but there is still much to do,” the executive vice-president concludes.

Stockholm (NordSIP) - According to a report by Citywire Selector, ABN Amro closed a strategy managed by Janus Henderson based on scores from Morningstar...
Read more
Manager Interviews

Between Impact and Custom-Made Sustainability

April 16, 2019
We use cookies to ensure that we give you the best experience on our website. If you continue to use this site we will assume that you are happy with it.OkRead more