Bundesbank Pushes Back Against Green QE 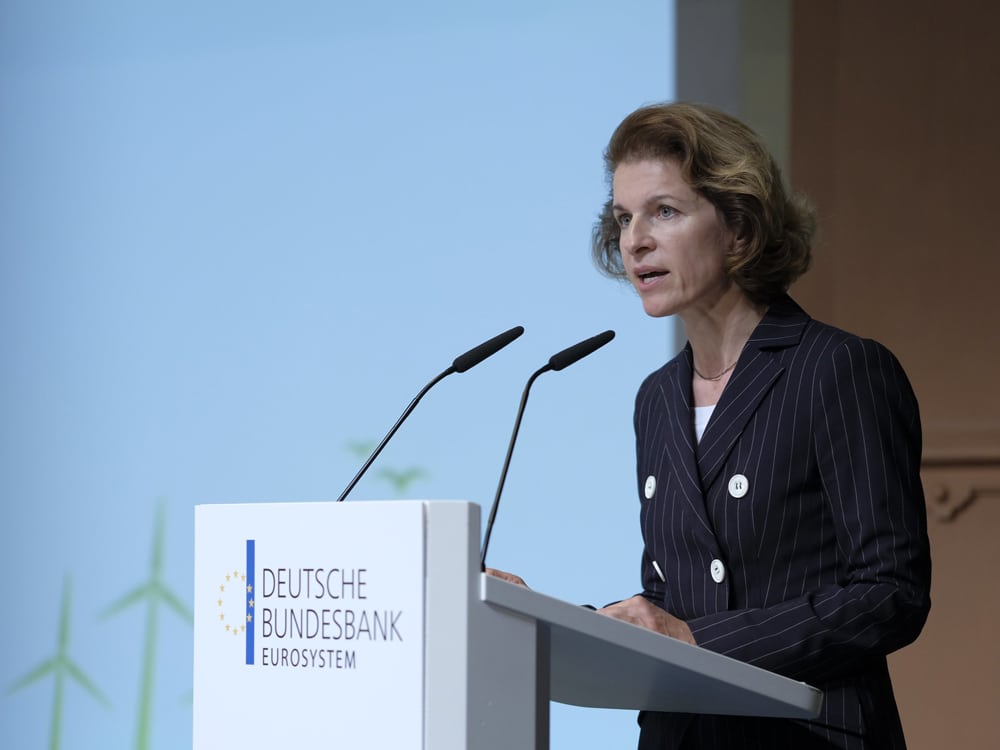 Stockholm (NordSIP) – “Central banks are ill-suited for the task of crisis manager for the climate,” explained to Dr Sabine Mauderer (Pictured), Member of the Executive Board of the Bundesbank, at the Deutsche Bundesbank’s second financial market conference. The President of Germany’s central bank, Dr Jens Weidmann, agreed. “I am very critical when people say that monetary policymakers need to ‘go green’ by launching ‘green QE’, say, or granting specific privileges to green assets within the collateral framework.”

The German central banker made these comments three days ahead of Ms Christine Lagarde taking over as president of the Governing Council of the ECB, the Eurozone’s monetary policy authority. Ms Lagarde has made the fight against climate change a key feature of her upcoming tenure at the ECB. “[The] primary mandate [of the ECB is] price stability, of course. But it has to be embedded in that that climate change and environmental risks are mission-critical,” she argued at her European Parliament confirmation hearing.

Her comments that “the objective of protecting the environment can certainly be taken into account by the ECB and its policies,” together with the recent decision of the ECB to return to asset purchases has made the Bundesbank wary of the policies to come.

A Matter of Democratic Legitimacy

The Bundesbank representatives argued that pushing a green agenda onto central banks undermines their institutional mandate and bypasses the necessary public debate and the legitimate decision making processes.

“The ground rules which keep the economy’s and society’s footprint on the environment in check are set by politicians,” Mauderer argued. “They have the democratic legitimacy to do so – central banks don’t.”

“I think a decisive and effective climate policy is the right course of action – but it needs to be implemented using the right instruments and by agents which have the democratic legitimacy needed for that purpose,” Weidmann agreed.

“Our mandate is to preserve price stability, and policy implementation needs to be in line with the principle of market neutrality,” the Bundesbank president added. “Skewing asset purchases to green bonds, say, would run counter to this principle, which is anchored in Article 127 of the EU Treaty.”

Other Tools that Central Bankers can Use

Despite their concerns about the use of monetary policy tools, both German monetary policy-makers agreed that climate change is a crucial issue facing the world and a consideration central bankers should bear.

“We need to make sustainability a key principle so that we can preserve the foundations of how we live and do business. Climate change makes a particularly urgent case for this,” Mauderer says. “[C]limate change is putting pressure on the environment’s ability to support and supply food, water, health and wellbeing, and note its potentially threatening consequences for the economy, security and civil unrest.”

“Central banks around the world have long since recognised their importance in matters of climate protection. This is why eight central banks and banking supervisors got together at the end of 2017 to establish a global network,” the Member of the Executive Board says with reference to the Network for the Greening of the Financial Sector (NGFS). “Our aim is to act in an internationally consistent manner and pool our expertise. (…) I myself presented an NGFS investment guide on sustainable portfolio management at central banks on the margins of the last annual meeting of the IMF and the World Bank. This handbook also contains the results of a survey among the NGFS member central banks.”

Weidmann was more focused on the effect of climate change on long term economic trends and the business cycle.“Both climate change and climate policy can have a bearing on macroeconomic indicators such as output and inflation. Central banks need to learn how the transmission channels work. We are still at the beginning of this particular journey,” Weidmann explained. He reminded the audience that climate change is akin to a tragedy of the commons where negative externalities are not internalised by economic agents, noting that the solutions probably lay in taxation and emissions trading, as argued by Arthur Pigou and Ronald Coase.

“Climate change is particularly apparent over the course of the economic cycle when it takes the form of supply shocks – just take the price increases due to crop failures or low water levels,” Weidmann explained. He noted that the crux of the issue was the increased frequency of these shocks and the volatility they bring to the real economy and financial markets.

“What is more, climate change might be accompanied by long-term structural shifts – such as changes in potential growth or the natural rate of interest – and could well be of relevance to monetary policymakers.”

“Green finance can augment effective and smart climate policy, but it cannot replace it. It is, and always will be, a matter for democratically elected politicians to make the necessary transition a reality,” Weidmann cautioned.

Image from Bundesbank via Flikr

Filipe Albuquerque
Filipe is an economist with 8 years of experience in macroeconomic and financial analysis for the Economist Intelligence Unit, the UN World Institute for Development Economic Research, the Stockholm School of Economics and the School of Oriental and African Studies. Filipe holds a MSc in European Political Economy from the LSE and a MSc in Economics from the University of London, where he currently is a PhD candidate.
Previous article
New Simulation Tool for ESG Factors
Next article
NBIM’s Exiting CEO to Focus on Renewables
October 31, 2019

Stockholm (NordSIP) - As the consensus towards green investments continues to gain momentum amid scandals and controversies, one of the main concerns for sustainable...
News

Stockholm (NordSIP) – A new report from the International Energy Agency (IEA) highlights some of the potentially serious supply chain risks as the world...
News

Stockholm (NordSIP) – Corporate Knights, a Canadian media and research company, has been compiling a ranking of the world’s 100 most sustainable corporations every...
News

Time to Zoom in on EU CSDDD

Stockholm (NordSIP) – The European Parliament’s Committee on Economic and Monetary Affairs (ECON) voted on 24 January in favour of the report on Corporate...