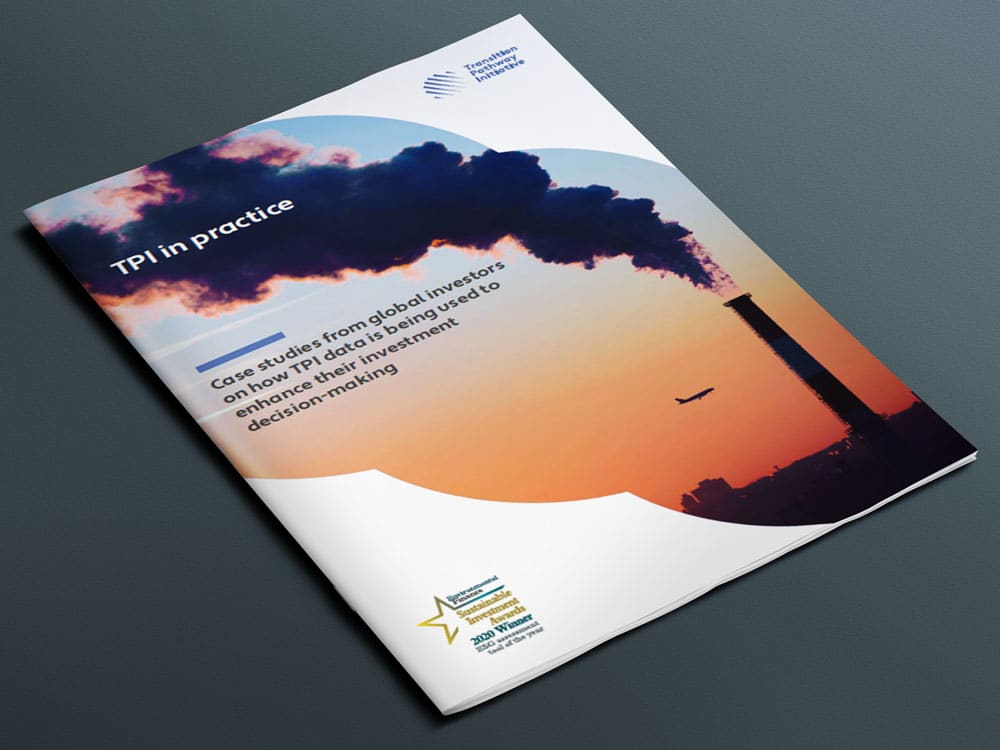 Stockholm (NordSIP) – The Transition Pathway Initiative (TPI) has published a TPI in Practice report, collecting six articles describing investors’ application of TPI’s climate management and carbon performance data in their investment processes. The six contributors to the report are Robeco, Brunel, Pinebridge, Länsförsäkringar, USS and the Church of England Pensions board. Throughout the report the six contributors strongly endorse the versatility and reliability of TPI data.

Robeco’s contribution counts with insights from its Engagement Specialist Cristina Cedillo Torres, who describes the advantages of using TPI data. “With so much conflicting information out there, one of the benefits of using TPI assessments is the consistency of data. By tracking the same indicators each year, using the same scenario assumptions, we can see real change over time – or identify where it’s not happening,” Cedillo is quoted as saying. The specialist singled out TPI’s Carbon Performance indicator as well as TPI’s management quality scores.

Brunel appeared to echo this line of argument when it highlighted the way it uses TPI’s management quality scores, describing how it set targets for engagement and for investment based around this measure.

PineBridge’s Alessia Falsarone, Managing Director and Head of Sustainable Investing,  again highlighted the importance of TPI data, while noting that the Initiative has helped the asset manager fill the gap between issuers’ long-term commitments and near-term behaviours.

Länsförsäkringar’s Head of Responsible Investment, Kristofer Dreiman, discussed how the Swedish insurance and pension company uses TPI data to approach companies in transition. “We strive towards implementing more sophisticated exclusion policies and we realised that a static exclusion list based on current performance failed to distinguish between companies which are on a journey towards better climate performance and those which are not. Using TPI data allows us to support those companies which are on this journey.”

The Universities Superannuation Scheme (USS) is one of the largest occupational pension schemes in the UK, with around £68 billion in assets under management. According to  David Russell, USS Head of Responsible Investment, TPI’s research helps identify those companies lagging in their climate transition management. “We find TPI data especially helpful in our voting and engagement activities.”

The Church of England Pensions Board chose to highlight the FTSE TPI Climate Transition Index, which it developed in partnership with FTSE Russell and uses TPI data to determine which companies should be included.

The index claims to be first passive product that can embed forward-looking data and aims to be the next generation of climate index. According to the report, “the Index shows that being invested passively does not mean an institution has to be passive in exercising the climate and stewardship responsibilities that beneficiaries expect.”

Image by Joseph Mucira from Pixabay

Stockholm (NordSIP) - On December 1st, NordSIP attended the “Sustainable Investing at an Inflection Point”, a webinar hosted by the CFA Institute to discuss...
Read more
News

December 4, 2020
Believe it or not, this is our third edition of the Sustainable Fixed Income Handbook. We all remember how 2020 started, the year everything was...

This article is part of NordSIP Insights - Sustainable Fixed Income Handbook. Read or Download the entire publication here. With the rise in popularity of...
Read more
News

Believe it or not, this is our third edition of the Sustainable Fixed Income Handbook. We all remember how 2020 started, the year everything was...
Read more

This article is part of NordSIP Insights - Sustainable Fixed Income Handbook. Read or Download the entire publication here. The growth of the exchange traded...
Read more

As investor appetite for sustainable opportunities continues to rise, the market is tightening, and finding attractive valuations can prove to be difficult. While some...
Read more

December 10, 2018
We use cookies to ensure that we give you the best experience on our website. If you continue to use this site we will assume that you are happy with it.OkRead more