Stockholm (NordSIP) – Every year, for a couple of weeks around international women’s day, gender equality issues tend to get more attention than usual. Media outlets race in featuring prominent female figures, new research and books are released promptly, and invitations to gender-related events pour in. One of this year highlights was the webinar organized by Nasdaq and The Swedish House of Finance on February 25 with the promising title ‘Gender and Minority Diversity – Developments Around the World’.

Adena Friedman, President & CEO, Nasdaq, kicked off the event with an energetic fireside chat. She didn’t spare her compliments when acknowledging how far the Nordics have come in the matter of ESG integration in general and gender equality in particular, admitting that Nasdaq was fortunate to integrate OMX and thus benefit from its higher standards in this area. Ms Friedman sounded almost apologetic when she described the exchange’s new US initiative, proposing that listed companies report the gender diversity of their boards of directors and declare a target on a “have or explain”-basis. It seemed too little, compared to the Nordics, which she admired for their successful strategy of disclosure and encouragement, rather than hard quotas.

At this point, Fredrik Ekström, President of Nasdaq Stockholm, had to correct her, however, quoting research from Allbright and the Swedish Private Equity & Venture Capital Association, pointing at a stagnating or even reversing trend in Sweden during 2020. He warned for a degree of complacency in our part of the world.

Ms Friedmant sounded excited about Nasdaq’s new purpose initiative, designed to support women and underrepresented minority communities with the resources needed to grow and sustain their businesses. She was also optimistic about the opportunities that the new, post-corona work culture, offering more flexible choices, might create for women in particular.

This introduction was followed by a roundtable discussion with an impressive panel of senior representatives from the industry. Five ladies joined the virtual stage to express their opinions on the importance of diversity for business success and how they are working to become more diverse: Viveka Hirdman-Ryrberg, Head of Corporate Communication & Sustainability, Investor AB; Maria Hamstedt, Chief Inclusion & Diversity Officer, SEB; Selina Millstam, Head of Global Talent Management, Ericsson; Anna Stenberg, Chief People and Platform Officer at Kinnevik and Julie Linn Teigland, Managing Partner, Europe, Middle East, India and Africa, EY. The moderator, Professor Gabriel Urwitz, Chairman of the Swedish House of Finance, had interesting questions and personal anecdotes enough to spur a lively debate. 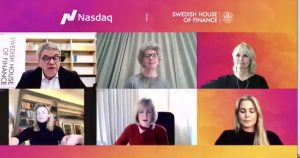 Ms Teigland summed up nicely the general feeling that the issue of diversity in business has progressed from “nice and right” to “necessary” for achieving better results. “Diverse groups also have more fun,” she added, laughing. According to Ms Hamstedt, we need many different perspectives to succeed with the business transformation in progress.

The Swedes on the panel seemed to agree that the image of the Nordics as a paragon of diversity is somewhat outdated and exaggerated. According to Ms Stenberg, Sweden has a lot to learn from the US now, and we need to overcome our reluctance to address other aspects of diversity besides gender. Ms Millstam went further to suggest that Sweden’s generous parental leave and the day-care system might have become counterproductive to gender equality, contributing to the famous glass ceiling.

In general, we seem to focus too much on board diversity and forgetting about middle management. Boards are the easy part; as one of the panellists put it, we need more women with P&L responsibility. Only investing in developing women at lower levels of the organizations will create the critical mass required to solve gender equality at the top. Ms Millsatam was adamant that we can’t underestimate the importance of technology, and it is vital to encourage more girls and young women into the field early on.

At one point, Ms Hirdman-Ryrberg pointed out the need to educate the men, too, as gender diversity is not only a women’s problem. The moderator, incidentally the only man on the panel, agreed with her, adding that more than 80% of the attendees at the webinar were women. How come that whenever there is a gender-related event, men seem to feel it is not for them, he wondered. And while the panellists could not come up with a right answer to his provocative question, they didn’t fall into the trap of pointing fingers either.

Webinars like this are essential, if only for showcasing strong, successful women. “You can’t be what you can’t see,” as Marian Wright Edelman puts it. Hopefully, we will see more of those, and not just once a year, around March 8.

Julia Axelsson, CAIA
Julia has accumulated experience in asset management for more than 20 years in Stockholm and Beijing, in portfolio management, asset allocation, fund selection and risk management. In December 2020, she completed a program in Sustainability Studies at the University of Linköping. Julia speaks Mandarin, Bulgarian, Hindi, Russian, Swedish, Urdu and English. She holds a Master in Indology from Sofia University and has completed studies in Economics at both Stockholm University and Stockholm School of Economics.
Previous articleAre PRI Investors Not Walking the Walk?
Next articleBest Sustainable Fund Polls Now Open
March 2, 2021

Stockholm (NordSIP) – As we are quickly approaching November and this year’s big climate summit, COP27 in Sharm el Sheik, a host of events...
Events

Stockholm (NordSIP) - Every year since 2019, the CFA Societies in the Nordics have come together to organise the Nordic Investment Conference. After a...
Events

Where Sustainable and Behavioural Finance Meet

The Dos and Don’ts of Sustainability Reporting

Stockholm (NordSIP) – For the fourth year in a row, on 18 August, Forever Sustainable, a combined consultancy, think-tank, and professional network, invited those interested...
Events

Stockholm (NordSIP) - In June 1972, the United Nations Conference on the Human Environment brought the representatives of 113 countries together in Stockholm to...