Corona Express to the Future 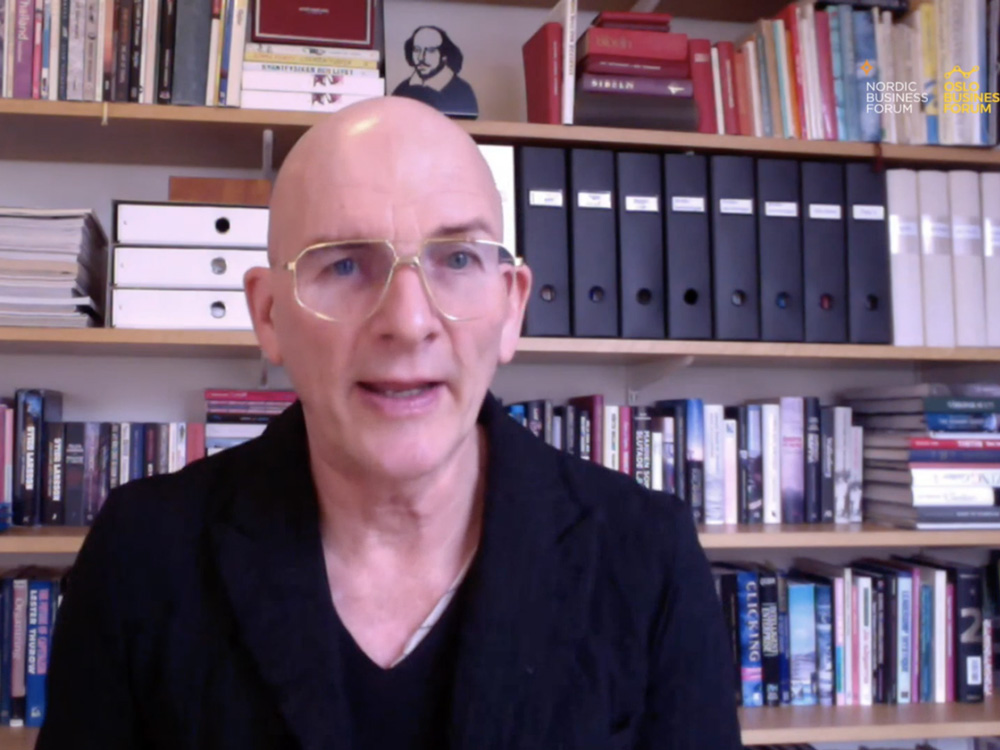 Stockholm (NordSIP) – “The Covid-19 pandemic has put us all in a time machine and thrown us into the future,” claims an excited Kjell Nordström at a webinar organised by the Nordic Business Forum, The World Post-Pandemic, on May 6th. As a scientist, he is fascinated to be able to stand back and observe what he calls “an enormous acid test, a quasi-experiment”, involving seven billion non-voluntary participants.

Tuning in to the event, the expectations run high. The famous Swedish economist and writer has been ranked among the top 5 of Europe’s best public speakers by The Global Gurus Top 30 Management. He recently published a new book, Corona Express, co-authored by Per Schlingmann.

“We are all apes,” reminds us Nordsröm, “lazy apes at that.” A permanent energy-conservation mode is our natural state, he argues, and we only change under pressure. “Well, Covid-19 provided that pressure on a grand scale,” he exclaims. The most obvious example is the rapid digitalisation that the world has experienced recently. “The tools and toys were all there even before, but only some of us were playing,” he says. “We needed a bit of a push.”

He then proceeds to explain the array of forces that the pandemic has triggered, forces that will change the rules of the game for individuals, companies, and society. Which of these changes will last and which will fade away as the pandemic recedes? Nordstöm’s rule of thumb is that half of the new habits are here to stay. He quotes Ericsson’s CEO, Börje Ekholm, who recently commented that about 50 % of business travel is gone forever.

Nordsröm sounds extremely optimistic when he talks about a post-pandemic era of growth. He mentions OECD’s latest report, estimating a future global surge in growth. What he is most excited about is that this new growth will be driven by what he calls “the hot matrix”. The new awareness of climate change means that we need to “re-do, re-make, re-build everything,” according to him. Steel, cement, buildings, farming, nothing will be the same in this bright new future that he paints.

“What is fashionable and what is cool has changed,” reflects Nordsröm. And according to him, sustainability is cool now. “I don’t know how it happened, but a one-week yoga course on Bali is not cool anymore. Coolness works in mysterious ways,” he adds.

Nordström is at his most optimistic when he talks about the Nordics. Somewhat controversially, he claims that our small countries up North, are emerging from the pandemics as supermodels again. We have proven to be much more robust than any economist thought we were. “We had built a Ferrari without even realising it, we thought we only had a Volkswagen,” he says. In his final comments, he is encouraging the Nordics to challenge Boris Johnson’s pledge to turn the UK into the most sustainable country. “We should give him a run for his money. We are able to do it here in the Nordics, and do it fast,” he concludes.

Julia Axelsson, CAIA
Julia has accumulated experience in asset management for more than 20 years in Stockholm and Beijing, in portfolio management, asset allocation, fund selection and risk management. In December 2020, she completed a program in Sustainability Studies at the University of Linköping. Julia speaks Mandarin, Bulgarian, Hindi, Russian, Swedish, Urdu and English. She holds a Master in Indology from Sofia University and has completed studies in Economics at both Stockholm University and Stockholm School of Economics.
Previous articleDNB AM Recruits Passionate ESG PM
Next articleNTAM Appoints New Head of Sustainable Investing
May 6, 2021

Stockholm (NordSIP) - In June 1972, the United Nations Conference on the Human Environment brought the representatives of 113 countries together in Stockholm to...
Events

Stockholm (NordSIP) – On a balmy May evening in Stockholm, the Nordic team of French bank BNP Paribas manages to conjure a veritable treat...
Events

Sustainability – Back in the Room and Ready for Action

There was palpable energy in the room as the investment industry gathered in London on April 26th for a post-pandemic rarity – a live...
Climate

The Culmination of IPCC’s Scientific Trilogy

On 4 April, the United Nations’ Intergovernmental Panel on Climate Change (IPCC) published the third instalment of its Sixth Assessment Report (AR6).  Whereas the first two working groups examined climate change from the physical science basis and impacts, and adaptation and vulnerability respectively, the contributions of Working Group III are dedicated to the topic of climate change mitigation.
Asset Managers